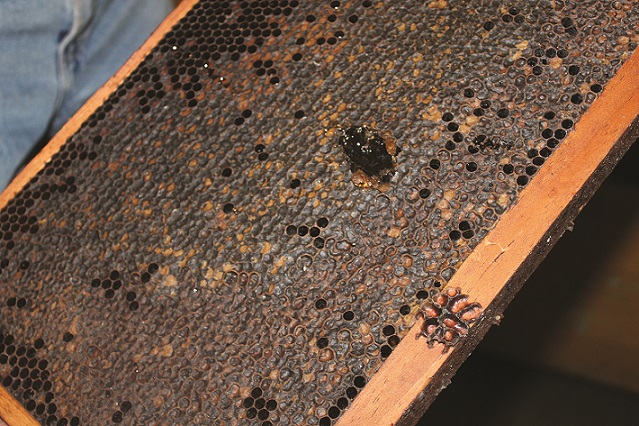 Spring is a time for rebirth and renewal. It’s the time of year for new beginnings when the sky is bluer and the grass is greener. The air is fresher. Flowers begin to bud and crops continue to grow. With all of the anticipation of this time of year, there is one vital part of this regrowth that can easily be forgotten about; bees. Bees not only give us honey, but play an important role in our crops, so David Winter of Chapparal Honey spent some time with me, sharing about everything that bees do from honey production to pollination.

Every part of honey production comes from flowers. The type of flower determines the type of honey, with San Diego varieties including orange blossoms, avocados, wild brush, buckwheat, sage and wild cherry. These flowers contain two ingredients vital to honey production; pollen and nectar. Pollen lies on top of the flower and hidden underneath is nectar.

The movement of pollen is a mutually beneficial process for bees and flowers. Flowers need pollen to be moved around in order to produce fruit. Due to the high protein content, bees gather pollen to feed to their young.

Nectar is what the bees are really after. Bees fly from flower to flower, gathering nectar and bringing it back to the hive. There, they regurgitate it, creating honey. Nectar alone spoils quickly, but the digestive enzymes from the regurgitated nectar create a natural preservative for honey, allowing honey to last for hundred and even thousands of years. Bees continue to collect nectar and make honey as long as they have space to store it, and flowers to collect from.

At Chapparal Honey, the summer months are the busy months, spent processing honey. Each hive resides in a box, and each box holds about forty pounds of honey. The honeycombs are removed from the box and brought into the factory, where the honey is spun out, kept at a warm temperature overnight and then drained into fifty gallon barrels. The barrels are then sold to a cooperative where they bottle and sell the product.

In addition to honey, the beehives produce beeswax. Like cows have milk glands, bees have wax glands. The beeswax comes right out of their body and is used for holding the honey. Bees produce about one pound of bees for every sixty pounds of honey. The beeswax is melted down into big blocks and sold to make products such as beeswax candles or surf board wax.

One of the most vital parts of the hive is the queen bee. Without a queen bee, the hive cannot function. Because of her high importance, a queen bee can cost between 24 and 27 dollars to purchase. Unlike the six-week life expectancy of a normal bee, the queen bee will live for a few years.

Though the queen is highly protected by the worker bees, her job in the hive is no easy task. The queen bee works hard to lay several thousand eggs a day, replacing the bees that are dying off. After three days, the eggs mature to larva, where they are spun into cocoons, and fed pollen to grow. After 21 days, they become adult bees.

In a natural hive, the queen takes a break from laying eggs in the winter. In the beekeeping business, the hives are artificially stimulated to believe it is spring year round. In order to keep the hives strong, the beekeepers feed them six months out of the year. Each hive receives around one gallon of syrup every two to four weeks, and is given protein patties containing soybean flour, brewers yeast and bee pollen. Every beehive is fed about thirty pounds of protein a year spread throughout a six-month period. They also receive around eight to ten gallons of syrup during this time as well.

When a beekeeper recognizes a strong hive, they can go into the hive and remove the queen. Without a queen, the bees are equipped to raise a new one. Because all of the worker bees are female and have the potential to lay eggs, one of those bees becomes the queen. Beekeepers assist in this transformation with a substance called royal jelly, which helps with fertility.

At one time, nearly 99% of the honey business was generated through producing honey. That was a time when housing developments were sparse and nature was readily available. Because of the scarcity of wild life for the bees to pollinate, today, two-thirds of the income comes from renting the bees to pollinate the crops of other farms. At Chapparal Honey, bees are put on a strict schedule each year. It is this that supports the honey business.

From November through January, the bees stay close to home and reside in the avocado and orange groves. This is beneficial for both the groves and the beekeepers, as plants need pollinating and the bees need a place to stay.

In early February, the beehives are loaded onto trucks and sent to Bakersfield to pollinate almonds. With over a million planted acres, 80% of the worlds almonds are produced in California. Each acre requires two beehives and the almonds are completely dependent on the bees for pollination. During this time almost all of the beehives in the entire country make their voyage to the central coast. At Chapparal Honey, they fit 200 hives on one truck, working for around three weeks to bring 600 hives a night to central California.

After two to three weeks, in late February or early March the bees return to San Diego and go back to the avocado groves. The bees stay in the avocados until May.

From May to July the bees move to Imperial Valley and spend most of their time pollinating alfalfa seed (one of the main crops in Imperial Valley), sunflowers, onions, cilantro and broccoli. After the summer, they return home for the Fall and Winter, where the focus is feeding and rehabilitating the hives. Then they begin the cycle all over again.

Beehives face many threats, and about 20-30% of bees are lost each year. Hives are subject to parasites, bacterial diseases, fungus diseases, and viral infections.

One parasite that serves as a threat to bees is called the varroa mite. Originating from China, this parasite sucks blood from the bee and injects a virus into it. Thymol can be used to kill the mites, but even after the parasite has been killed it continues to harm and potentially kill the bee due to the virus that has been injected.

Though the work is hard and the risks are high, the honey bee is older than history, having survived for thousands of years. And if we’re lucky, with the help of beekeepers, in a thousand years they’ll still be around.